I love Queenstown. I could happily spend an awful lot of time there, but unfortunately I had only one week. I say it's unfortunate, but for the sake of my health and bank balance, it was probably a good thing.

Some people may think it's strange for me to come to a place like this, the "Adventure Capital of the World™", and talk firstly about food. If you do think that, it's because you haven't been to Fergburger. If you have been there, you'll understand where I'm coming from. This legendary fast food outlet (I use that term loosely, as it takes a considerable amount of time to actually get your food) produces the most ridiculous, delicious, heart-attack inducing burgers you could think of. I don't know whether to be ashamed or proud to admit that in six days, I had four burgers from there (the first night was a little healthier, having all-you-can-eat pizza from World Bar), the highlight of which was undoubtedly the enormous Big Al. To quote the menu, "Al delivers a double serving of New Zealand beef (1/2lb), lashings of bacon, a whole lotta cheese, 2 eggs, beetroot, lettuce, tomato, red onion, relish & a big wad of aioli." I actually had to take a nap after completing this monstrosity.*

When I wasn't eating, I found time to do one or two other things in Queenstown, such as leap off a platform 134m from the ground. I had always planned to jump the infamous Nevis Bungy**, but was glad to find that a five others on my bus - Keir, Jon, Becky, Gary and Sofia - were also preparing to take the leap of faith. In comparison to most Monday mornings, this one was quite surreal. Having survived a somewhat hairy bus ride through the mountains, we arrived at the jump site, where Sofia casually claimed "it's not that high." I don't know if all Swedes have this warped sense of perspective, but her calm demeanour was in stark contrast to my own. One of the promotional leaflets for the jump summed up my feelings in a quite poetic manner: "even my shit was scared." 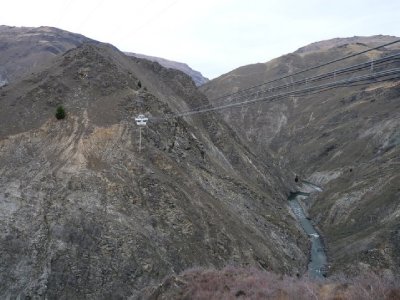 Before long we were harnessed up and led outside. As the above picture demonstrates, the jump site is suspended above the Nevis River by a 380 metre long cable. To get there, you have to travel across in an open top metal cable car similar in size to a hot air balloon basket. Even this I found terrifying, and I was seriously questioning my sanity as it slowly made its way across. I clambered into the surprisingly large cabin to find a glass floor. Great. While everyone else tussled for the best viewing spot, I sat at the back and stared at the ceiling, talking to myself like a complete nut-job. After 3 or 4 people had jumped (and, happily, survived), my name was called. I sat down to be strapped in, pulled a deceivingly calm smile for the camera, while the bloke gave me final instructions. I didn't hear a word he said. As I shuffled towards to edge, I had little to no control over my limbs; my arms were all over the place, and my legs went all Bruce Grobbelaar on me***.

What I actually did was bend my knees, lean forward, and fall over, allowing gravity to take over. It was not the most stylish bungy jump you will ever see, but it did the job. For the next 7 seconds or so I was free-falling towards the river. In most circumstances, I'd have been admiring the exquisite scenery around me. As it happens, I was too nervous to even scream; I reckon I'm one of the few people to do the jump in complete silence. Then, it was over. With adrenaline pumping through my veins, I almost forgot to pull the cord around my ankles that released the harness from your feet, meaning you are brought back up head-first rather than upside down. Thankfully I remembered, so was finally able to enjoy my surroundings while being inched up. Before I knew it, I was back in the cabin, and soon on the cable car back to solid land. 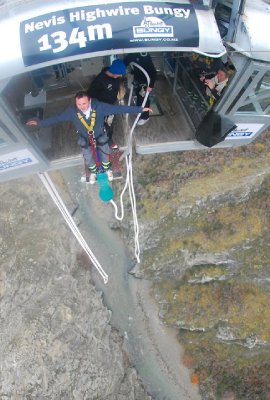 People often compare bungy jumping to skydiving, but for me they're chalk and cheese. I absolutely loved the skydive, it was immense fun, but not all that scary. The bungy jump, in contrast, was petrifying. Because of this, the burst of adrenaline keeps you buzzing for hours, even days, after. To get the best of both worlds, do both!

I slept well that night. This was thanks partly to the bungy, partly to Big Al, and partly to the obscene amount of Jägermeister I consumed that evening in order to win a t-shirt from the Buffalo Bar!

The next day we decided to get the Skyline Gondola to Bob's Peak for a spot of luging. We got to the top and were ski-lifted to the start of the track, and got ready to roll (not race, as that was against the rules. We would never break the rules). The term 'luge' is used rather loosely, it's more like go-karting without an engine, not at all like actual luging. It was good fun none-the-less, thanks in no small part to our Brazilian friend, Tiago, who was clearly of the opinion that breaking is for the weak, even for tight hairpins. This, admittedly, made him very quick. It also meant he was the only one of our group of nine to crash. Three times.

If you've read my other blogs from New Zealand, you'll notice a chap called Nick crops up a fair few times (if you haven't read them, why not?). We actually met on the Magic Bus from Auckland to Rotorua, and just so happened to have the same itinerary from there to Queenstown, so spent about 3 weeks travelling together. Luckily we got on, and have done an awful lot in those 3 weeks. Queenstown, however, is where we would go our separate ways, as Nick only had four nights, along with most of the others in the group. We therefore headed to our newly-Christened local, Buffalo (we had 2-for-1 drinks all week), for an emotional farewell; well, it wasn't actually that emotional, a manly handshake and not-so-manly hug, but you get the point. While travelling alone has a great many benefits, it was brilliant to have someone to travel with for that length of time; skydiving, camping and hiking, to name a few, would not have been quite so awesome had I done them by myself (or possibly not at all).

Anyhow, if there was one thing that decreased heavily in Queenstown, it was my money. If one thing increased, it was my weight. In an attempt to buck both of these trends, I spent most of the next day walking, spending hours exploring the east side of the lake. The fresh air and spectacular scenery must have gone to my head, because I had a strange urge to jog part of the way back. 15 minutes after acting upon this urge, my enthusiasm had vanished and I carried on walking. I'll just have to wait until Australia to lose the weight, as I wont be able to afford food there.

As I mentioned in my previous blog, the ski and snowboarding dependent economies Wanaka and Queenstown have been badly hit by the lack of snow. Much to their relief, but my annoyance, the weather took a turn for the cold for my last few days in Queenstown, limiting what we could do. With the weather particularly bad, we killed time playing Yeniv, a brilliant Israeli card game (thanks to Nick for that one). When we dared venture outside, we had a couple of rounds of frisbee golf. I was worse than useless first time around, scoring well over 100, but fell in love with the game anyway. My second round was somewhat more respectable, as I carded an 88 (I have no idea if that is actually respectable, but I'd take that in normal golf).
We ventured to Buffalo for one final time that evening, before jumping on the bus the following morning. To sum up Queenstown: I spent too much, I ate too much, I drank too much. But I had a damn good time in the process!

The next stop was to the Edinburgh of New Zealand, Dunedin, where I would spend three nights. To be honest, following Queenstown, this made me more than a little depressed. My spirits were raised, however, with the knowledge that Dunedin had two particular attractions: Speight's Brewery and the Cadbury factory; if there's two things that can cheer me up, it's beer and chocolate.

I got to the hostel about 4, where I killed a couple of hours talking to the two Aussie lads in my room, before setting off for the brewery. The tour itself was entirely forgettable, but for the tasters at the end. Thankfully Ellen, who I'd met on the way to Wanaka, didn't like one or two of the beers, so I kindly "tasted" those for her as well, like a true gent. I got back to the hostel to find the aforementioned Aussies, as well as two other English lads, getting ready to head into town. They asked if I fancied it and, seeing as it was Saturday night, it would have been rude to say no.

I'd judged Dunedin to be boring, but, being a uni city, it came to life after dark, and was a surprisingly good night out. A particular highlight was attempting - and failing - to convince a local woman that I was not Irish, nor had I ever set foot in Ireland. She wasn't having any of it, so I called her Australian and left it at that.

The next day I met up with two of the Queenstown group, Jack and Tim, who had rented a camper. We found somewhere that served a Sunday roast for $10, which made us all very happy, before going on a road trip to the beach. In contrast to Dunedin's rather drab appearance, the beach was surprisingly nice, as was the weather. Once we got back we set about finding somewhere that would be showing the British Grand Prix that evening. As it was a Sunday, and the race didn't start until midnight local time, I was not confident of success. At around quarter to 12, we finally found a bar that was still open, and had televisions. The landlord agreed to put the F1 on and remain open, on the condition that we bought enough drinks to make it worth his while; a condition we were more than happy to comply with.

For our final day in Dunedin, we did the tour of the Cadbury factory. Much like the brewery, the tour itself was pretty forgettable (after all, it's just a working factory), but we got more than our fair share of samples, so everyone went away happy.
I've got a few extra days to kill, so rather than travel all the way to Lake Tekapo the next day, I decided to hop off at a place called Oamaru, where I'm sat right now. In a few hours I'm heading to the beach to see some penguins which, as those of you who know me personally may know, is quite exciting for me!****

I then have two more stops, Lake Tekapo and Kaikoura, before flying from Christchurch to Brisbane. Assuming this will be my last blog from New Zealand, I'd like to thank everyone - locals and fellow travellers - for making my stay here unbelievably brilliant. I have loved my time in this wonderful country; Australia has quite a job on its hands to match it.