Departing Wellington, it was time to jump aboard the ferry and head to the South Island. The idea is to get the ferry on either a Wednesday, Friday or Sunday, as the Magic Bus will be ready and waiting at the terminal to head to Nelson. Simple. Nick and myself, however, managed to confuse ourselves and booked it for the Tuesday. As the tickets are non-refundable, it meant we had no choice but to spend a night in the tiny town of Picton. The idea of spending 24 hours there with absolutely nothing to do was not the most appealing, so we each forked out $35 and rented a car. By doing so, we were able to get off the beaten track and visit fascinating landmarks such as the Mussel Capital of the World™, Havelock, where we had lunch at a cafe that had daily supplies of fresh mussels. I had a burger. The roads in the area are the sort of ones Top Gear visit when searching for the best in the world, winding and weaving between the mountains. It was made all the more interesting by the dangerous and often hidden piles of rubble dotted around, caused by mud and rock slides.

Having got back in one piece, we caught up with the bus the following morning, and were finally heading to Nelson, where we would be spending three nights. Much to the shock of my travel buddies Nick and Annika, I have never once been camping. I can honestly say I've never found the idea of sleeping outside on a hard surface, with nothing but a bit of fabric protecting me from the elements, particularly appealing. Call me soft, but a nice comfy bed in a room with central heating is much more my cup of tea. Having said that, I'm willing to give anything a go once, so I agreed to spend the night at the beautiful Abel Tasman National Park.

Having spent the first night in Nelson, we set off at some early time to Marahau, where we boarded an Aqua Taxi to Awaroa. In contrast to its rather mundane name, the Aqua Taxi was an exciting experience in itself, with the speedboat regularly getting launched into the air by the violent waves thumping into it. It calmed down for five minutes to catch a glimpse of the extremely cute seal colony at Tonga Island, before continuing the bone crunching ride. With my internal organs re-arranged, we reached Awaroa, where we began a 23km hike to our camp for the night, Anchorage. Thanks in part to the wet and windy weather, the trek was pretty hard going. A particular lowlight was when my left foot, nice white trainer 'n' all, suddenly disappeared into the thick mud below. Nick found this very amusing for roughly 6 seconds, at which point his laughter was abruptly halted as his right foot went the same way. Karma.

We made it to the camp-site just before dark, set up the tent, and took shelter in a nearby hut. There was only one sensible thing to do at this point: get drunk and play cards, so we duly obliged.

After a surprisingly comfortable and warm(ish) night*, we packed our stuff and began the 11.5km walk back to Awaroa. Thankfully the weather was much kinder to us, with the clear blue sky and blazing sunshine enhancing the spectacular scenery around us. We made our way back to Nelson, where we jumped into the hot tub to soothe our aching muscles. From there, we heading to a pub that served excellent local beer, and could have fish and chips delivered to your table. In a word: Heaven! 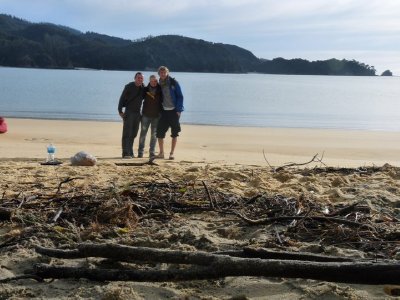 The morning after it was time to visit a small town called Greymouth, a place pretty much as dull as the name suggests. It does, however, have one redeeming feature: Monteith's Brewery. As far as redeeming features go, that's not a bad one. For a mere $30 (roughly £15) you get a tour, a meal, and beer. Lots and lots of beer. As a result, I developed a certain affection for the place, and thoroughly enjoyed my brief stay there (what I remember of it, anyhow).

In a seemingly unrelated matter, when I was about 5 or 6 I had a bad reaction to washing powder. Since then, my clothes have been washed with a powder that is soft and kind to my sensitive skin, and I have long forgotten about this particular allergy. When I reached Franz Josef, I was reminded of it in a quite nasty fashion. Having done the excellent full-day hike of the glacier**, I returned back to the hostel to grab a quick shower. My arm had been itching, but I assumed it was just a bite; I was wrong. I don't wish to go into too much detail, but my body was not a pretty sight [Insert Joke About How My Body Is Never A Pretty Sight]. To make matters worse, the tiny town of Franz Josef doesn't have a pharmacy, so I had to make-do with some cream from the local corner shop. The next day we headed south to the nearby Fox Glacier, where I hand-washed every item of clothing I had with a chemical-free washing powder. Never have I been so grateful to be able to wear my own clothes!

With that drama over and done with Nick, Sofia and I awoke early to take on the Mt Fox Route, a (supposedly) 8 hour return trek, suitable for "fit, experienced and properly equipped people." I'm not sure as I completely fulfil any of that criteria, but it looked like fun none-the-less. It turned out to be the most technically challenging trek I've done thus far, the steep - sometimes vertical - terrain proving a worthy adversary. Once at the 4400ft high peak, our reward was a magnificent panoramic view of the surrounding snow-tipped mountains and the Fox Glacier. After the most scenic lunch I've ever had, we began to make our way back. Due to the extreme gradient of the track, and the speed at which we were taking it, the descent was an absolute knee-killer. I fell over on more than one occasion, and nearly fell over on many more, until the terrain finally began to even out. We completed the journey in a respectable five and a half hours, much to the satisfaction of my competitive nature. As the light faded, we were treated to a magnificent multi-coloured sunset, nicely finishing off what had been a fine day. 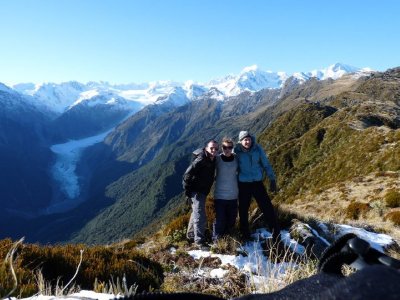 The bus picked us up the next morning, stopping off at Lake Matheson, or Mirror Lake, supposedly one of the most photographed spots in New Zealand (how they figure that out, I do not know). As its nickname suggests, the lake mirrors the mountainous background, due to the water being extremely still. In my humble and usually disregarded opinion, it wasn't that impressive; I've seen a couple of other lakes here that use the same phenomenon to a much more spectacular effect. What I was impressed with was the delicious egg and bacon pie at the cafe, splendid!

Next stop was Wanaka, a town that could have been plucked straight from the Swiss Alps. At least, I think it could - I've never actually been to the Swiss Alps, but it definitely has that ski vibe to it. There was also a frustrated atmosphere around the town as, along with Queenstown, Wanaka should be covered in a blanket of snow by now. Unfortunately for the avid skiers and snowboarders, the snow is still yet to come. I, on the other hand, was delighted with the conditions, and took the opportunity to go for a scenic walk. I'd planned to rent a bike, cycle 50km to Mt Aspiring National Park, and take on a challenging looking hike. The guy at the bike shop talked me out of it though, as he reckoned it would be at least an 8 hour round trip on the bike, leaving no time for walking, and suggested I got the bus instead.

I took his advice, and stood outside for what seemed an eternity waiting for the non-existent bus. At this point, I was getting cold (it may not have been snowing, but it was by no means warm), so decided to begin walking and attempted to hitch-hike. Unfortunately, once out of Wanaka, none of the cars that went by stopped for me. When I say 'none', I mean 'neither', as only 2 cars passed in the hour and a half I walked. I was getting somewhat frustrated at this point, so gave up and wandered around Lake Wanaka for a few hours. It was nice, but not quite the mammoth hike I'd prepared myself for. On the plus side, it was completely deserted, so I was able to sing out loud to my music without being laughed at or beaten up. Every cloud...

That evening, shockingly, we went to the pub. Beer cost $4 rather than $7.50 that night if you worked in hospitality, which, as it happens, was exactly what we were doing with our 48 hours in Wanaka (*wink wink, nudge nudge*). I entered a killer pool competition***, and using some tactical positioning from myself Nick and Sofia, I beat some clearly superior players to claim second place, and a free pint!

We had the morning free before hopping back into the bus. Destination: Queenstown. For those of you not familiar with Queenstown, it is the "Adventure Capital of the World™", and I would be spending a week there. This could be dangerous... 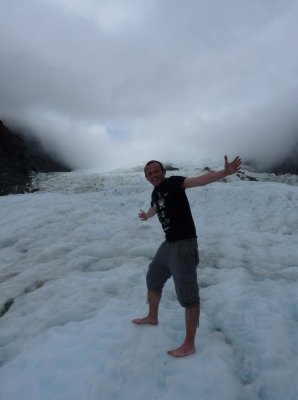