Climbing up mountains one day, jumping out of a plane the next

After a week of beautiful weather in the paradise islands of French Polynesia, it was time to head to Auckland for the start of my six week New Zealand adventure. Upon arrival at the airport I was greeted with some homely British weather conditions; it was wet, windy and cold, not particularly suited to my attire of shorts and t-shirt. Once I'd made my way to the city, I headed to the Base hostel, which would be my home for the next four nights. It's fair to say that they know their clientele, as the first night they were offering free pizza at the bar, a God-send to us budget conscious travellers. Having had more than my fair share, and beating anyone who dared challenge me at pool, I was about ready for bed.

To be brutally honest, four nights in Auckland was roughly three nights too many; it's a nice enough city but by day three I was getting seriously bored. The silver lining to this particular cloud was that in not doing anything, I saved myself a fair chunk of cash, which I would be putting to very good use in the days to come.

By Monday morning I was glad to see the sight of the Magic Bus, ready to take me south to Rotorua. When on the bus I got talking to an English lad called Nick, a Scotsman called Kieran and an Austrian called... um... well, none of us could actually remember his name, so we simply called him Austria, which worked well. We spent the afternoon and evening taking in the sights and smells of Rotorua (for those of you not familiar will Rotorua, large parts of it smell unfortunately similar to rotton eggs due to the geothermal activity releasing sulphur into the air - it's not nice). In the morning our bus took us to Wai-O-Tapu National Park, where various elements in the land produce an incredable array of colours* in the surrounding lakes, craters and caves. Particular highlights included Devil's Home, Devil's Ink Pot, Devil's Bath, Devil's Cave and the rather sinisterly named... Rainbow Crater.

The park also features Lady Knox Geyser, which erupts at the same time every day. To my disappointment, this is not a natural phenomenon (it does erupt naturally, but its timing is unpredictable); the eruption is induced with the addition of soap. While it was in impressive spectacle, the whole event had something of a Blue Peter feel to it.

After spending a couple of hours at Wai-O-Tapu, we hopped back on the bus and headed south to Lake Taupo, where we'd be spending three nights.
Mt Tongariro, Mt Ruapehu and Mt Ngauruhoe provide Taupo with a stunning backdrop. Since Monday, it had been my lifelong ambition to climb the snow tipped Mt Ngauruhoe, better known as Mt Doom from Lord of the Rings. Along with Nick, I therefore signed up to do the Tongariro Crossing trek on the Wednesday. Unfortunately, due to adverse weather conditions, attempting to reach the summit of Ngauruhoe unaided would have resulted in a severe case of death, so we had to make do with the smaller peak of Tongariro.

As far as consolation prizes go, this wasn't a bad one. Having reached the summit a good 15 minutes before anyone else on our coachload of 28 (there was one lad who provided us with some competition, but his map reading skills let him down), we were rewarded with a breathtaking view of the Blue Lake and Emerald Lakes (pictured below). After we'd taken pictures, had a bite to eat and a bit of a rest, it was time to head back. As we crossed back past the Blue Lake we were exposed to the most violent winds I have ever experienced. Not being the biggest guy in the world, I was forced to stop on several occassions in order to prevent being blown over, and to shield my face from the waves of dust being hurled through the air. Once through that particular hazard, it was simply a case of strolling back down the mountain, before heading back to Taupo for a couple of well earned beers. 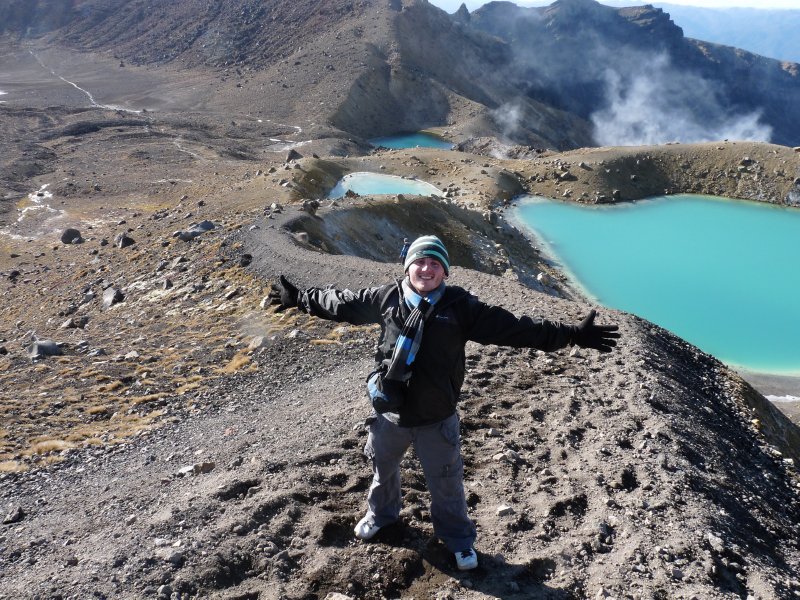 After a day of hard work on Wednesday, Nick and I decided to take things easy on Thursday... by going skydiving! While it was bitterly cold, it was a beautifully clear and still morning - perfect conditions for jumping out of a plane. The hostel rang the company (Freefall), and 10 minutes later we were being whisked away. With barely enough time for any nerves to raise their heads, we were in our jumpsuits, strapped in and airborn. At a guess, I'd say we were in the air for about 20 minutes before the first of our group was flung out, followed by Nick, then myself.

To be honest, I was surprised by the fact that I wasn't actually that scared, nowhere near as much as I was doing a bungee jump a couple of years back. Once you're sat on the edge of the plane, you have very little say in what happens next; the instructor decides when you're going, whether you're ready or not. Before you know it, you're falling at somewhere close to 200kph. The rush of adrenaline is extraordinary, without doubt one of the best experiences of my life. Once the parachute was ejected things slowed down somewhat, and I had time to appreciate the beauty of my surroundings from this unique vantage point, with a glorious view of Lake Taupo (which, apparently, is larger than Singapore), and the mountain trio in the background. Having finally done it, I would recomment skydiving to anyone and everyone. It was absolutely amazing, and I would jump at the chance (sorry) to do it again!

The following day we got the bus back to the Tongariro National Park, via Waitomo Caves, famous for the glow worms that illuminate the walls. We spent Friday night at the picturesque hostel at the National Park, before heading to the capital city, Wellington, the final stop before ferrying over to the South Island. That evening a group of us headed to the Westpac Stadium to watch Wellington Hurricanes take on Canterbury Crusaders (featuring Dan Carter, apparently one of the best players in the world), the first rugby game I've ever attended. Aside from a Mexican wave that completed five laps of the stadium, the atmosphere was somewhat subdued. This may have had something to do with the Hurricanes shocking inability to keep hold of the ball, causing them to blow several gilt-edged chances as they slumped to a 16-9 defeat. After the rugby, we went into town, sampling Wellington's lively night life, returning at something o'clock in the morning.

After a much needed lay-in the following morning, myself, Nick, Jen, Alex and Rachel - all of whom I met on the bus - visited the Te Papa Museum, where I learned that I could cause an earthquake that would destory the world simply by jumping as hard as I could. Who knew? With that insightful information in mind, I went with Jen to explore the rest of the city, stumbling upon a hidden gem in the Olympic Museum. While it was roughly the size of a shoe box, it had some interesting memorabilia, including the medals of New Zealand's most successful Olympian (2 golds, 1 silver, but one of the gold medals was 'on tour') and, rather bizarrely, the torch from the 2000 games in Sydney.

It was then back to the hostel for some pizza (is having pizza four times in a week considered unhealthy?), before a good old pub quiz. Thanks mostly to the two answers I contributed, we claimed third place and a $20 bar tab!

At the time of writing, I'm currently seeing out my last day in Wellington (going to have some left-over pizza in a minute), before leaving for Picton in the South Island tomorrow morning. If, as everyone says, the South Island is that much better than the North, I should have a rather interesting four weeks in store. Until then, I'll leave you with some news that may be of some comfort to all you at home: the weather here is bad, and getting worse. The South Island is going to be absolutely freezing. However, this does result in stunning scenery, and lends itself nicely to activities such as glacier walking at Franz Josef, so I'm not going to complain!