A Hitchhiker's Guide To Polynesia 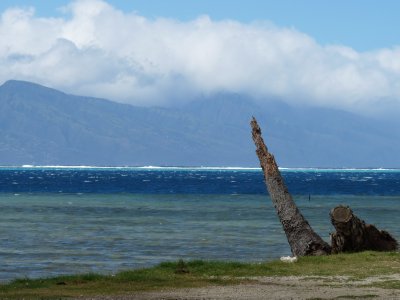 I arrived in Tahiti at roughly 5am, and by the time I'd made it from the plane to the terminal building I was sweating! It was that hot.
The first thing I did upon arrival was withdraw 20 grand in cash (the money here is amazing) and hire a car. Now, being under 25, they told me I was only allowed a grade 1 car, which in this case was a very fetching white Fiat Panda. I don't know if any of you Internetians have ever been to Tahiti, but it's not what you'd call flat. The wee Panda was happy enough going downhill, but going uphill, bless her, she struggled. I realised this because the first thing I decided to do was drive up a couple of mountains and go exploring.

Once out of Bear Grylls mode, I realised I had no idea where I actually was, nor where I would be sleeping that night, which was quite important. Using my excellent sense of direction (Pacific Ocean on my left, big mountains on my right) I made my way to the hub of the island, Papeete.
Upon arrival I didn't think it would take me long to find the address of the hostel I was hoping to stay at, but I was wrong. So very wrong! The road system in Papeete is utterly ridiculous, and the Tahitian natives are mental drivers, with little to no regard for road markings, right of way, or speed limits. Throw in a bunch of suicidal scooter and cyclists, combine with dogs sleeping in the road, add two shots of vodka, shake a little, and you've got yourself a  Disastertastrophy cocktail.

What's worse is that I've never before driven a left hand drive car, nor on the right side of the road. So while all that other gubbins was going on around me, I was concentrating on not opening the door to change gear or having a head-on collision. I eventually reached the hostel which, thankfully, had vacancies. I staggered to my bed and lapsed into a coma. Fortunately, the coma lasted little longer than a normal night's sleep (cynics would question whether it was in fact a coma at all), so I was up at a respectable hour to discover what Tahiti had to offer.

Now, I didn't want to get there and compare everything to the Cook Islands, but inevitably, that's exactly what I did.
Strike one went to Tahiti; the scenery is utterly stunning. The Cook Islands - or to be specific, Rarotonga - is hardly ugly, but Tahiti is considerably bigger, allowing for a wider variety of views and landscapes. Just when you think it can't get any more beautiful, you turn a corner and are blown away by something new. My right index finger suffered from severe camera cramp (I'm assuming that's a legitimate medical term). 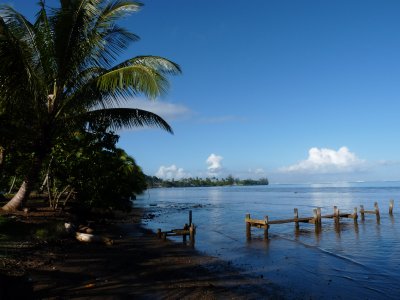 From there on in however, Tahiti begins to lose its' way. For a start, there's not really that much to do that isn't prohibitively expensive. While I had the car, I did a full lap of the island, stopping at any point of interest. I went on a fair few treks, discovering some hidden gems, such as a couple of picturesque waterfalls and lagoons. Other than that, there's a great local market, but not a lot else. By the fourth day I was starting to get a bit, well... bored.

The great thing about these sort of places is the ability to island hop. As I felt I'd seen all there was to see in Tahiti, I decided to get a ferry over to the island of Moorea and spend a couple of nights there. The boredom soon subsided. Once the ferry arrived, I planned to get a bus to Haapiti where I would look for the superbly named 'Mark's Place' in the hope of a bed. I failed to realise that, as it was Sunday, there was no bus service (at least not in the 2 hours I waited). I therefore got my map out, which was pretty useless as it didn't state to what scale it was, and tried to figure out if it was within walking distance, bearing in mind I had all my luggage with me. Using a couple of landmarks as reference points, I figured it would take me about an hour and a half to walk, which I could handle.

2 hours later, I realised I was wrong. I was only about 20% of the way there, and there was no way my body would survive another 8 hours in that heat. I checked my map and came to the conclusion that I was in the middle of roughly nowhere. With no phone to call a taxi, I opted for the next best thing: hitchhiking (coincidentally, I'm reading The Hitchhiker's Guide to the Galaxy on my Kindle). After a surprisingly short amount of time, I'd been picked up by a hilariously insane Moorean chap,  and was sat in the back seat of a car that was literally unable to travel above 20mph without risk of falling apart.

More by luck than judgement, I was at Mark's Place. Mark, a very pleasant fellow from Ohio, booked me in. Excellent. I then did a 360 and noticed that Moorea was as stunning as nearby Tahiti. With little else to do, I decided to go for a walk and take a few nice pictures, before returning back to Mark's for dinner. It, however, didn't quite go to plan because, while on my way back, I was called over by a group of lads drinking beer. Now, we all know the saying 'don't speak to strangers'. If we were to elaborate on this saying, it would probably go something like 'don't speak to strangers, particularly if they're drinking beer and smoking, whilst you're in a foreign country by yourself, where you don't speak the language, and are quite clearly a tourist'.

As you can probably guess, I failed to heed this advice. What happened for the next x hours is a bit of a blur, partly because I joined them in their aforementioned activities, partly because it was all completely surreal. Despite the obvious language barrier*, they embraced me into their considerably sized family (seriously, I was holding a baby at one point!). While they seemed friendly enough, occasionally they would speak to each other in French, look at me, and laugh. I'm not going to lie, it made me somewhat apprehensive. This apprehension was exacerbated by the fact that the warming afternoon sun had been replaced by complete darkness, and I wasn't entirely sure how to get back to Mark's.

Trying not to offend them, but also being concerned for my own safety, I politely declined the offer of dinner and a bed for the night, not to mention the proposal to marry the mother of the baby, and headed back. Two brothers also had to walk back in the same direction, so escorted me most of the way. One of them turned off to his home, leaving me in the company of one of the scariest looking blokes I've ever seen (I've never considered face tattoos particularly friendly), in complete darkness. Thankfully, I made it back to the hostel safely, where I had time to reflect on what a bizarre night it had been.

Whilst eating my beef flavoured Ramen noodles, I started to wish I'd accepted the offer of dinner. I also wish I'd accepted the offer of a bed, because my hut, beautiful though it was, can best be described as a wooden tent, as it did little to protect you from the elements, specifically the winds that were raging outside. This was largely due to the fact that in place of glass windows, it had mesh netting. There were curtains, but using these to try and keep the wind out was as useful as trying to control a fire by putting a cardboard box over it.

After a breezy night, I had one full day in Moorea. Thankfully Mark was on hand to advise me on how best to spent it, creating a mini itinerary for me. Mid morning I set of on the Three Coconut Walk, an epic trek through the forest. The route had been decimated by winds, with several trees and bridges falling victim, making for some interesting, and often dangerous, obstacles. Assuming you survive these, after about 2 and a half hours your effort is rewarded with a sensational, glorious, magnificent panoramic view of the island. After a spot of lunch, I headed back to Mark's, where I grabbed a bicycle and some snorkeling gear, and headed to the beach. The water was beginning to get a bit violent by the time I got there, so I didn't have too much time, but still spotted some beautifully coloured tropical fish, as well as a particularly shy hermit crab. I then sat on the beach watching the sun set, before heading back for dinner. All-in-all, a very successful day.

It was then simply a case of getting back to Tahiti, killing a few hours, and heading to the airport. Needless to say, it didn't work out that way (you're surprised, I can tell). I had to check out by 10am, and was due to be picked up at 1pm to get the ferry at 2.45pm. All very straight forward. However, I had not had anything to eat or drink since the afternoon before, and the local shops only took cash, of which I had none. I therefore decided I needed to get to one of only two ATMs on the island. Now, most people learn from their mistakes. Not me; I've worked out I make the same mistake an average six times before even beginning to learn. I looked at my trusted map, and decided I could make it to the ATM, buy food and drink, and make it back with time to spare. I forgot - despite being there almost a week- that mornings are agonizingly hot, I had all my luggage with me and, on account of not having drank in roughly 15 hours, I was on the verge of dehydration. By the time I'd made it to the ATM, got cash, drank 1.5 litres of water, eaten a ham sandwich, an apple and half a pack of Oreos, it was 12.53.

With no buses in sight (Moorean public transport, to put it lightly, isn't the best), I had only one option: hitchhike, again. I was this time picked up by the most amazingly kind-hearted Tahitian lady, Valerie, and her daughter. Rather than simply take me to the dock, Valerie took me to her home, gave me some of the most delicious home grown fruit imaginable, and gave me a tour of her back garden. Most back gardens don't require a spine-tingling, head-bashing, ear-popping, 4x4 trip in order to gain access, but this was not like most back gardens; it was unbelievable, the view was breathtaking. After insisting I take more fruit, which I gladly accepted, Valerie dropped me off at the dock, leaving with me her address and phone number should I ever happen to pass through Moorea in the future. 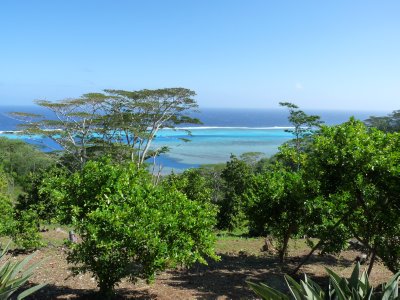 I made it to the ferry with time in hand, and finally made it back to Tahiti. I made sure I got to the airport in plenty of time. When I say plenty of time, I mean 14 hours before my flight was due to depart! Why is it that when I allow time for unexpected occurrences, they never materialize? Oh well, next stop is Auckland and six weeks in New Zealand. It's fair to say, I'm excited!