Toronto had quite a job to do; being the follow-up act to New York City is no mean feat. But, with the CN Tower providing a commanding stage presence, it performed admirably. Where-as NYC punches you in the face with a succession of head banging rock numbers, Toronto slows things down a bit with a some soothing melodies.

From almost anywhere in the city, the awesome CN Tower dominates the skyline. After spending Monday doing roughly nothing, I decided to wander down to see it up close and personal on Tuesday. I hadn't planned on going up it, but having seen the sheer size of the thing (1,815ft/553m), I couldn't resist. The elevator fires you up to the observation level 1,136ft from the ground (equivalent to 113 stories). From here you get an impressive view of the city and beyond.

More impressive, though, is the glass floor one level down. Convincing your brain that it is perfectly safe to step forward, when nothing but 2.5" of glass separates you from plummeting to the ground, is not easy! I paid a wee bit extra to go to the Sky Pod a little higher up, which at 1,465ft was the world's highest public observation gallery until 2008. If you ever get the chance, don't bother; the view is exactly the same. I explored the city for the rest of the day* before getting a relatively early night. I was like a kid on Christmas Eve, knowing that in the morning I would be able to tick off one the top items on my 'to see' list. 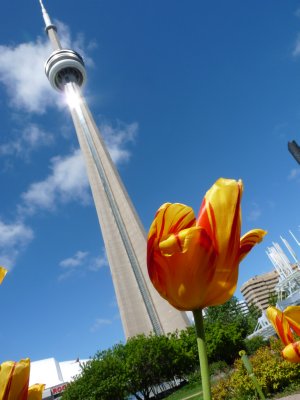 The CN Tower may be Toronto's ace in the pack, but it comes a distant second when it comes to Ontario as a whole.
The bus arrived at Niagara Falls at about 11.30am. The first glimpse I got was of the American Falls, which was pretty impressive; I then cocked my head a little to the right, and saw the famous Horseshoe Falls (Canadian side). I can't think of one single superlative that does justice to how incredible that sight is, so I'll use a bunch: breathtaking, epic, powerful, amazing, astonishing, staggering, mind-blowing... you get the point.

I didn't have much time to take it in as, along with the rest of the tour group, I was ushered along to the 'Maid of the Mist' boat ride. I'd paid an extra $16 for the experience and - unlike the Sky Pod - it was worth every penny. Sorry, cent. The boat takes you as close as is safe to the foot of the Falls, and it is from here you get the best understanding of how awe-inspiringly powerful it really is. The sight and sound of over 100,000 cubic feet of water crashing down every second, with the mist floating overhead, is one of the most fascinating experiences of my life.

After that we had a few hours to explore the rest of the area. I used this time productively, A) taking lots of pictures, B) getting a burger** and C) going up the Skylon Tower. Again, I paid extra for this. Again, it was worth it. While I wouldn't say it was a must-do, like Maid of the Mist, the 360° observation deck gives you a stunning view of the Falls from above, providing a plethora of new photo opportunities. So engrossed was I, that I failed to realise the time; I was (only slightly) late back to the bus, where I was greeted with an ironic cheer.

Leaving the Falls, we stopped off at the beautifully quaint town of Niagara-on-the-Lake, before going for a bit of wine tasting. It was amusing watching half the group act like connoisseurs, swirling and sniffing the wine before taking a delicate sip. Me? I necked it. I'd never heard of ice-wine before, let alone taste it, but I absolutely love it. Unfortunately, it is extremely expensive, as it takes roughly 30 times the number of grapes to make as regular wine. Damn my expensive taste. After the wine was tasted, it was back to Toronto. I returned to the hostel and made myself a delicious pasta dish (for the third consecutive day), just as the weather - which had been beautiful all day*** - went into thunderstorm mode. All-in-all, Wednesday was epic³. 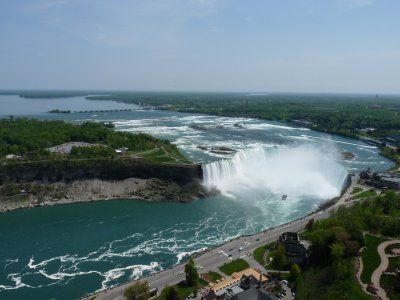 For my final day in Toronto, I decided to go on Trip Advisor. I'd run out of my own ideas, so consulted the people of the internet ('Internetians' as they shall be referred to from here on in). According to the Internetians, the Royal Ontario Museum was 'a great way to spend a few hours' and a 'must see'. This was in stark contrast to the opinion of an Irish couple I spoke to, who said it was 'rubbish and boring'. I figured the Irish are just an uncultured bunch, so decided to go for it. I'm with the Internetians, I thought it was brilliant, particularly the African, ancient Egyptian and ancient Greek exhibits (although the Roman one was closed, to my disappointment).

With that, my time in Toronto came to an end. Next stop: San Diego! Or at least, that was the plan.

As those of you who have been to America post-9/11 will know, getting through customs is a tedious process involving fingerprinting and photographing, usually done once you arrive on US soil. Travelling from Canada (or Toronto, at least), they inexplicably carry out this process before departing. To add insult to injury, this weekend happens to be a holiday weekend, so there were 2 - TWO - officers working, with a queue of well over 100 at any given time. By the time I'd gotten through, it was gone 11, and my flight was long gone. I had two choices: wait until the following, or fly to Los Angeles and figure it out from there. I opted for the latter.

It was in the departure gate where I had my first slice of good fortune for the day. Next to me in the queue for customs had been two women - an Estonian and a Russian - who found themselves in the same predicament as myself. They decided to drive to San Diego, and asked me if I'd like to join them and split the rental, which I did. For the next three hours or so I found myself in the utterly bizarre situation of travelling in the back of a car with two complete strangers, very friendly though they were, driving down the west coast of America (which, incidentally, is a stunning route). It's fair to say I had not expected that when I'd woken up.

Around 7 hours later than originally planned, I finally arrived at my hostel, which is when the fun really started. The last three days have been pretty crazy; all shall be revealed in blog 3, so stay tuned for that!