After an emotional farewell to the friends Thursday night, and an emotional farewell to the family Friday morning, it was finally time to leave British soil. As soon as I did, something annoying happened. When in economy class, it's fair to say you're not gifted with a huge amount of leg room. Most people are therefore gracious enough not to fully recline their seat. Most people, but never the ones sat in front of me! A bit of knee-in-the-back action, however, and she soon resumed the upright position.

One inconsiderate lady aside, the journey was pretty uneventful; I got through customs without making any jokes about having a bomb, and arrived at the hostel about 4pm. After some hardcore napping, I went to the welcoming party. I soon got talking to people from all over the globe, and got in a heated debate with an Australian girl regarding semantics. Whilst we agreed on the ambiguity of the term 'fag', I was a little underwhelmed when I realised what she meant when she said I could see her thong.

Saturday was... how can I put this eloquently? Mental. I was up at the crack of sparrows to meet Lady Liberty and visit Ellis Island, which was fascinating. I'd paid a little extra for the audio tour of both, only to forget to collect my headset at Ellis Islands, oops. Once I departed the ferry I was presented with the opportunity to purchase some intriguingly named Obama Condoms. I politely declined. Having stopped to watch a street performance from a quartet of hilarious, and very talented, break dancers, I decided to go to the Empire State Building. The bus terminal looked too confusing for my liking, so I decided to walk, despite the fact I didn't actually have any idea where it was. Turns out it's a very long way away. On my travels I stumbled upon Union Square, Ground Zero and Broadway, where I witnessed the rather elaborate union of messrs Tom and Zach. A quaint church it was not. What it was was a bright pink mobile chapel, complete with loud speakers pumping out music with far too much bass, and plenty of scantily clad dancers. It put Will and Kate's poxy efforts to shame.

Once I got to Broadway and Times Square I suspended my search for the Empire State Building in favour of M&M World. A solid choice - pretzel M&Ms are something special! I filled my boots, and decided to resume my original search. Thanks to my in-depth knowledge of the NY street track on Gran Turismo, I had a rough idea of where it was. Once there, I offended the street vendor when I told him I'd heard the SkyRide was 'crap', and just wanted to go to the observatory on the 86th floor. He begrudgingly sold me a ticket, which granted me the opportunity to queue. And queue. And queue a little more. I eventually reached the observatory, which in fairness was pretty spectacular. Having taken the stock photos, I joined the queue for the exit. 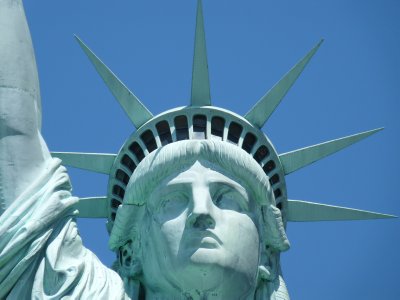 As soon as I was back on terra firma, it began to rain, which put a slight dampner (ha!) on what had otherwise been a superb day. I got back to the hostel, had a quick shower, and got ready for the night out I'd signed up to. Having not heard another British accent up until then, I got talking to a couple of English girls, and we headed to what was without doubt the strangest club I've ever set foot in. Having been violated by the security guard (he didn't even buy me a drink), we were finally allowed entry. To say New Yorkers are a boisterous bunch would be an understatement; they're just plain mental! Us Brits are a more reserved lot, and by midnight the three of us had seen enough - too much in some cases - and jumped in a cab to Times Square. We found an Irish bar that, while not exactly quiet, was somewhat more tasteful than the club we left behind. After meeting some more interesting characters, we ended up back at the hostel about 4am.

Sunday was rather less hectic. I tagged along with Alex and Ruth - the English girls from the previous night - to visit Colombia University, Brooklyn Bridge and Bloomingdales. I then headed off to Rockefeller Center, and walked back to the hostel via Central Park (where I inevitably got lost). I then had a couple of hours to kill before heading off.

New York was a great way to start my trip. I've never been anywhere quite like it and, while 2 days was enough do pretty much everything I wanted to, I do love the place just for the sheer insanity of it all. It's certainly a place I think everyone should try and visit at some point if possible. I just hope the rest of my chosen locations live up to the high standards which have now been set.
I've just arrived at the hostel in Toronto (which is awesome) after a very long overnight bus journey. I'm probably just going to spend today recovering, explore Toronto properly tomorrow, and visit Niagara Falls on Wednesday.
I might post again from San Diego, otherwise you probably wont hear from me until New Zealand in a couple of weeks. Until then, I shall bid you farewell.

Haha, I loved the bit about knowing the streets because of Grand Tourismo!! Sounds fab =D xx

Great account of your travels so far. Cant wait to be in New York now. x