Avid readers of this blog, of which I assume there are many, may have noticed that I never actually posted a final entry. This was mostly due to the fact that once I finished my trip, I sulked for a considerable amount of time and had no enthusiasm to write about the last leg. However, a mere 11 months late, I have decided to write about my time in Australia and Hong Kong.

The first port of call on my Aussie adventure was Brisbane. For two reasons - one being that I'm English, the other that I'd spent six weeks in New Zealand in winter - the glorious sunshine was something of a shock to the system, and within two days I was crimson. The problem was exacerbated my the fact that I'd been wearing my aviator sunglasses, leaving white circles around my eyes and making me look, in the words of one of my roommates, 'freaky' and 'like an alien'. 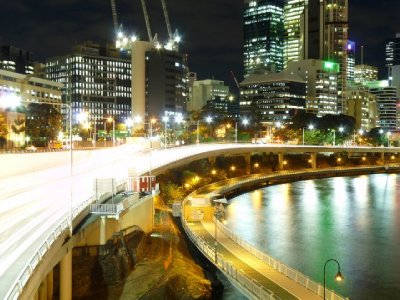 I made my way from Brisbane to Noosa - where I did little but lay on the beach during the day and drink at night - then to Hervey Bay. From Hervey I went on a two-day tour of Fraser Island, famous for being the world's largest sand island, its 75-mile beach, a shipwreck and, of course, dingos. The 'tropical' (wet) weather conditions put paid to any hopes of relaxing on the beautiful beaches, but didn't stop us hardcore members of the group taking a dip in the picturesque Lake McKenzie. It was, in a word, cold.

The next day the driver asked if anyone had an iPod to plug into the stereo, which I did. I put it on random, and out of roughly 2000 songs, the first two we were treated to were Natalie's Rap by The Lonely Island/Natalie Portman, and Jason Waste by Sway. If you're not familiar with these songs feel free to look them up, but be warned: they are quite, um... vulgar.

That evening a few of us countered the elements by warming up in the hot tub before dinner. Because I'm an idiot, I forgot to pack any shorts or underwear other than my swim trunks. Once out of the hot tub, I was therefore forced to trape through the cafe/restaurant area to the bathroom and attempt to use the hand dryer to dry my trunks, wearing nothing but a towel around my waist. While doing so, a very smartly dressed Irish chap walked in. As it turns out, he was the best man at the wedding taking place in the hotel, preparing for his big moment. Before I knew it, he was enthusiastically reciting his speech to me, in the gents, while I was naked but for my towel. It was an odd situation, but to be fair to the guy, his speech (the bit he read to me, anyway) was pretty damn funny! 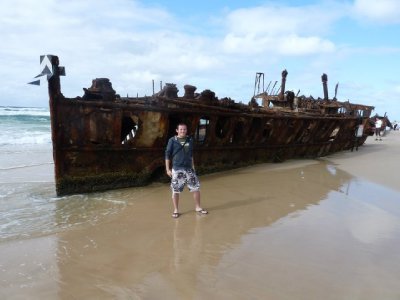 Me at the Maheno Shipwreck

Leaving Fraser and Hervey behind me, I headed to Agnes Water and Town of 1770, where a kangaroo nearly killed me. For a very reasonable $55, I decided to do the Scooterroo tour. Basically, you get to ride a Chopper motorbike around for a few hours, taking in the sights of this little town. All was going swimmingly until a huge kangaroo, being a complete moron, decided to cross the usually quiet road just as 25 or so motorbikes were racing towards it. Inevitably, it was me he jumped out in front of. I had been going at 80kph, and thankfully managed to slow down to about 60 just as he leapt over my front wheel, no more than 2 or 3 feet from my face. It was genuinely terrifying, as I'm fairly sure I'd have come of a hell of a lot worse than Skippy! One near-death experience aside, the tour was brilliant. Those of us at the front were having drag races which, considering none of us had any experience on bikes, was probably somewhat reckless (and also, thankfully, wreckless).

That evening at the pub, by being the first person to collect a dirty sock, a piece of chalk, a bra and a condom, I won... a free Scooterroo ticket! I managed to sell it for $40, which I used to drink as much as I could in the hour I had before my overnight bus trip to Airlie Beach. I slept well!

At the hostel in Airlie, my winning ways continued as my team - me, an Aussie girl and an Irish lass - stormed to quiz victory with a quite stunning score of 9/20. That may not seem like that good a score, but as it was general knowledge, it technically means we know 45% of everything there is to know in the world, which is a lot. Our collective genius was rewarded with a bottle of what was loosely called champaign. We continued the victory celebrations in town, where someone, for no reason that I can remember, gave me a football (which I later lost in a bush). The most memorable event of the night occurred on the way home, when I got chatting to a girl called Storm. In my drunken and cynical state, I demanded proof that her name really was Storm; she duly obliged by showing me her passport, which quite clearly stated her given name as... Storm. It is, without doubt, my favourite name ever (edging out Kirby, who I met in Agnes Water).

The following evening I boarded the Anaconda III. The next three days and nights were the stuff dreams are made of. We sailed through the magnificent Whitsunday Islands (74 of 'em), including the phenomenal Whitehaven beach, before heading out to sea where I was able to tick off the final item on my mental to-do list: dive the Great Barrier Reef. It was every bit as magical as it sounds. I was particularly hoping to see a shark, and it wasn't long before my wish was granted; about 10 minutes into my first dive one of the little fellas (about six ft) cruised on past us, before turning around and giving us a look at his pretty face.

Sharks aside, there were thousands of fish, coming in all sorts of shapes, sizes and colours, with the reef itself providing a beautiful backdrop. Stunning. Due to financial constrains and the fact my right ear was playing up, I only did two dives. While other dives were taking place, the rest of us took the opportunity to go snorkelling, which wasn't a bad consolation prize; there was still a vast array of fish to be seen, including a massive, umm... ugly green thing (my marine knowledge is somewhat limited) known locally as Elvis. Diving and snorkelling aside, we spent much of the time soaking up the sun, whale watching and fishing. The three days flew by; I had glorious weather, great company, and good food. Can't ask for much more than that! 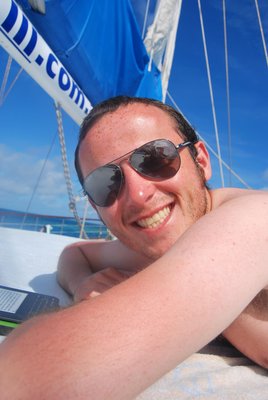 Leaving Airlie Beach, I headed to Townsville for two nights. I had a day to kill, so the lady at the hostel recommended I go for a walk up Castle Hill, and was even kind enough to drop me off at the start of the track. As she drove off, I noticed a sign warning of steep inclines and loose rock, recommending the walk only be done by those of adequate fitness. Usually I ignore that sort of stuff, but on this occasion there was a slight issue: I was wearing flip-flops. The sensible thing to do would have been to walk to the other side of the hill and walk up the nice tarmac path, but where's the fun in that? So, on I went. After roughly 4 minutes, I fell over. I picked myself up and cautiously carried on at a rather sluggish pace. It was hard work. To rub salt in the wound, it was one of the hottest days I've had in Australia. To rub sulphuric acid in the wound, I'd forgotten to bring any water with me. When I finally reached the summit, 60 sweaty minutes later, there was, thank God, a water fountain. Having re-hydrated myself, I took in the lovely views, before making my way back down. Again, I opted against the tarmac option, and had several near death experiences along the way. I'll learn, one day...

The final stop on my journey was Cairns, the party town. In an attempt to save money, I told myself I wouldn't drink for the five nights I was there. However, accommodation was a lot less than I'd budgeted for, so I had all this money left over, what else was I meant to do with it? Anyhow, the decision was taken out of my hands when I befriended a group of Irish lads. It was only ever going to end one way. Highlights of the Goon-fuelled nights out included me somehow finding myself participating in a bar-top dancing competition (I came 2nd), a Jagger style wig, and bumping into Arj Barker (he of Flight of the Conchords fame) in Gilligan's. In between the drinking, there was some daytime, which we spent exploring the town. We gatecrashed a wedding at the Botanical Gardens, which was quite frankly the worst reception imaginable, conducted by a vicar who seemed to think he was a stand-up comic. We got told off for touching the stretch Hummer.

My final day in Cairns was spent at the beach, where a group of us had a superb barbecue in the glorious sun. I tucked into a lovely kangaroo steak, thinking of the 'roo that had attempted to kill me earlier in the trip as I did so. With that, my time down-under was over, and I was soon at the airport waiting for my mammoth 18-hour journey to Hong Kong (via Auckland).

Unfortunately I was feeling pretty under the weather during my three days in Hong Kong, which was not helped by the overwhelming heat. However, I wasn't going to let that stop me. Having walked down the Avenue of the Stars, Hong Kong's answer to Hollywood's Walk of Fame, I visited the excellent Museum of History. After the sun had gone down, I took my spot on the harbour to watch the sensational Symphony of Lights: a music, laser and light show that illuminates Hong Kong's dramatic skyline.

Most of the following day was spent at the rather impressive Tian Tan Buddha and exploring Hong Kong island, although I was unfortunately unable to make it up Victoria Peak. And that was it. After three phenomenal months, I was on my way to the airport, ready to fly back to sunny England.

Looking back at it a year on, I can say without doubt that it was the best few months of my life. I saw some amazing places, did some brilliant, stupid and ridiculous things and met many wonderful people (many of whom I'm happily still in touch with). When I was younger I wasn't bothered about travelling, however this trip whetted my appetite immeasurably. It's a big world out there, and with this trip I have only scratched the surface. So, stay tuned. There will be more to come!